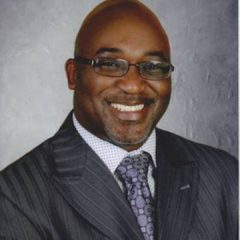 Elijah Collins, Jr., is a native of Rome, Georgia. He is the oldest of three children born to Anna and Elijah Collins, Sr. He has one brother, Michael, and one sister, Krystal. Accepting Christ at an early age, he became very active in his home church, the Greater Mount Calvary Baptist Church. After graduating high school he attended West Georgia College.

In June 1991, he married his college sweetheart, Angelyne Edwards of Savannah, GA. Their union has been blessed by God with two beautiful children, Elise Nicole and Joshua Miles.

In June of 1993, he and his family joined the Salem Missionary Baptist Church of Lilburn, Georgia, under the leadership of Rev. Dr. Richard B. Haynes. It was at Salem that he answered the Lord’s call on his life to preach the Gospel, and in August 1994 he preached his initial sermon and was licensed to preach the Gospel. The following month, Rev. Collins was assigned to be the youth and children’s minister at Salem where he voluntarily served faithfully in this ministry for the next five years. During his tenure, God allowed him to take the Salem children and youth to a higher level in their spiritual growth and development.

In November 1999, Rev. Collins was ordained and asked to join the Salem Church Staff as the first ever full-time Youth and Children’s Pastor.

In January 2001, Pastor Collins began to serve as Chaplain of Grace Heritage Christian School in Stone Mountain, GA, while continuing his ministerial duties at Salem.

After almost a year of ministering in this vineyard, and witnessing the Lord move on the hearts of countless people, Pastor Collins was asked to start a church in the sanctuary at Grace. After hearing the clarion call of God and months of praying and planning, the Lord gave him the name and the vision for the new church, “NEW JERUSALEM BAPTIST CHURCH, Where New Beginnings Are Built Upon A Solid Foundation.”

Pastor Collins led this new ministry into the Snellville area where in only 3 years of being in existence he led the congregation into purchasing its first church building located at 1958 Dogwood Road in Snellville, GA.

Under his pastoral leadership, New Jerusalem Baptist Church has grown from 17 founding members to a membership of more than 300. At the present time Pastor Collins has licensed over 15 associate ministers, and has over 20 sons and daughters that are proud to call him their spiritual father. Two of which are now leading their own churches of which Pastor Collins has initiated planting.

Pastor Collins works tirelessly for his members. He is a champion for people young and old. He shows his love for the youth by visiting and speaking with them at their local schools. He shows his love for his seniors by sharing with them monthly during their monthly senior luncheons. Pastor Collins also instructs weekly, Preachers Training Class, Bible Studies and still makes time for his families many activites. Pastor Collins has a reputation of reaching beyond the walls of New Jerusalem to work with non-members in the surrounding community.

Pastor Collins is a Visionary. He sees his ministry transcending the walls of New Jerusalem and gladly steps in whatever direction God orders. God has shown Pastor Collins that his ministry will branch out in many new directions and that there is so much more work he has for him.

In 2008, Pastor Collins led New Jerusalem in a new Community Outreach that reached beyond the wall of the church and provided free home cooked meals, and clothes to those that were in need and took advantage of the service.

Pastor Collins holds a Bachelor of Science in Christian Ministries from Point University and is currently pursuing a Masters of Divinity at Columbia Theological Seminary.

He is a 2009 recipient of the Outstanding Georgia Citizen Award, awarded by then Secretary of State, Karen C. Handel.

In November 2010, Pastor Collins was elected President of the African American Fellowship of the Georgia Baptist Convention.

With the leadership of Pastor Elijah Collins, Jr., and because of his continuous obedience to GOD, New Jerusalem Baptist Church will continue to be a viable and inspiring entity in Snellville and the surrounding areas.

Subscribe to receive email updates with the latest news.